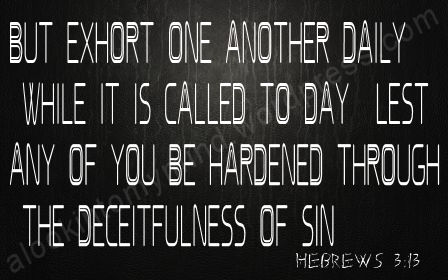 This list is NOT exhaustive, so you may encounter a stronghold or symptoms that aren’t listed.

You can recognize that a stronghold exists when any of the symptoms produced by that spirit are HABITUALLY PRESENT.

Acts 5:3But Peter said, Ananias, why hath Satan filled thine heart to lie to the Holy Ghost, and to keep back part of the price of the land? 4Whiles it remained, was it not thine own? and after it was sold, was it not in thine own power? why hast thou conceived this thing in thine heart? thou hast not lied unto men, but unto God. 5And Ananias hearing these words fell down, and gave up the ghost: and great fear came on all them that heard these things.

Ananias died because of a lie. The question was, “what made you do such a thing?” A Demon of deceit. Ananias was in such agreement with a demon of deceit that his heart was full of guile. Demons promote bible illiteracy, ignorance, foolishness, as part of protecting their lies.

Romans 1:24Wherefore God also gave them up to uncleanness through the lusts of their own hearts, to dishonour their own bodies between themselves: 25Who changed the truth of God into a lie, and worshipped and served the creature more than the Creator, who is blessed for ever. Amen.

Psalm 63:11But the king shall rejoice in God; every one that sweareth by him shall glory: but the mouth of them that speak lies shall be stopped.

Revelation 12:9And the great dragon was cast out, that old serpent, called the Devil, and Satan, which deceiveth the whole world: he was cast out into the earth, and his angels were cast out with him.

A lie is a powerful thing once it’s believed. A lie has the power to drag people to hell without much effort from Satan. He gained dominion over this planet through one lie. Most of us live in lies. Our social status is a lie. Our marriage is a lie.

The first stronghold, DECEIT, is both powerful and prevalent.

Deceit is the very essence of the devil. Jesus Christ wants us to know that, “When [Satan] lies, he speaks his native language, for he’s a DECEIVER and the
FATHER of lies.” (John 8:44)

Satan deceived Eve to sin. And our Adversary has used deceit ever since to entice people down a path of destruction.

Go over each symptom under this stronghold very carefully. If you hear a
rationalizing voice in your mind trying to convince you that a particular symptom
DOESN’T APPLY to you, it most likely does.
There’s a strong connection between the stronghold of deceit and your sin nature.

It produces a lying assumption that there’s an area of your life that can NEVER CHANGE.

Any time you believe an aspect of your character is UNCHANGEABLE, you’re
letting yourself be deceived.

The stronghold of Deceit also masks over other strongholds. In this way people are
attracted to one another by their common stronghold that’s hidden by deceit.

When Satan is in charge, deception is chosen over truth.  He cannot build on truth. So Demons hate the truth. If you are having a hard time understanding the word of God, a demon is blocking you. Bind deception and you will begin to see and hear and understand the truth.  Truth is Jesus Christ. He said, I am the truth. He did not say, I have the truth, but I am the Truth.  And to His people he commanded: You shall not bear false witness. You shall not lie. You shall not deceive.

Truth and demons cannot co-exist. Where there is truth, every demon is uprooted. What you know about the truth will set you free.  What most people don’t understand is that Satan will at times tell you half truths, little truths, but not the whole truth.

Demons work hard to make sure you heed their lies at whatever cost.

1 Timothy 4:1Now the Spirit speaketh expressly, that in the latter times some shall depart from the faith, giving heed to seducing spirits, and doctrines of devils; 2Speaking lies in hypocrisy; having their conscience seared with a hot iron;

John 8:34Jesus answered them, Verily, verily, I say unto you, Whosoever committeth sin is the servant of sin. 35And the servant abideth not in the house for ever: but the Son abideth ever. 36If the Son therefore shall make you free, ye shall be free indeed. 37I know that ye are Abraham’s seed; but ye seek to kill me, because my word hath no place in you. 38I speak that which I have seen with my Father: and ye do that which ye have seen with your father.

39They answered and said unto him, Abraham is our father. Jesus saith unto them, If ye were Abraham’s children, ye would do the works of Abraham. 40But now ye seek to kill me, a man that hath told you the truth, which I have heard of God: this did not Abraham. 41Ye do the deeds of your father. Then said they to him, We be not born of fornication; we have one Father, even God. 42Jesus said unto them, If God were your Father, ye would love me: for I proceeded forth and came from God; neither came I of myself, but he sent me. 43Why do ye not understand my speech? even because ye cannot hear my word. 44Ye are of your father the devil, and the lusts of your father ye will do. He was a murderer from the beginning, and abode not in the truth, because there is no truth in him. When he speaketh a lie, he speaketh of his own: for he is a liar, and the father of it. 45And because I tell you the truth, ye believe me not. 46Which of you convinceth me of sin? And if I say the truth, why do ye not believe me? 47He that is of God heareth God’s words: ye therefore hear them not, because ye are not of God.

Firstly, I am a woman Son of God (Rom 8:14) Wife to a Firefighter Mother of three Daughter Sister Friend I am a country girl at heart. My roots are deep. Gardening is my favorite past-time. Photography is in my blood. I am genuine and best of all...I am me. View more posts

12 thoughts on “Strongholds Part 2 – The stronghold of Deceit”