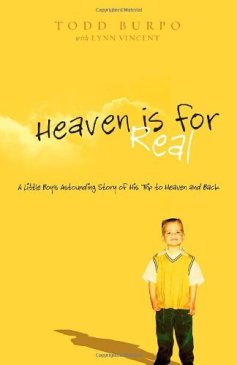 Heaven is for Real is the life-near death-back to life story of a four year old by named Colton Burpo. Colton is the son of Todd and Sonja Burpo. The story is revealed by Colton to his father over the course of 3 or 4 years. (2003-2007) The book detailing the story was written in 2010.

Wow. That is really the only words I have after reading this book. Please don’t get me wrong. My “wow” is not a good thing.

If you take a deeper look into this book and when it was written, any normal person can see the need for money that this family had. Todd was a Pastor which he paints a typical picture of the ministry. Long hours. Overworked. Underpaid. Under appreciated. Along with that they have dealt with a lot of struggles. Todd was diagnosed  with a severe leg problem, kidney stones and hyperplasia. A  breast biopsy showed cancer cells which resulted in the surgical removal of Todd’s breasts. Sonja had a miscarriage.On top of these trials,  their son Colton required emergency treatment for a ruptured appendix. Colton was shuffled between 3 hospitals before the proper diagnosis was made. He almost died. Doctor bills were probably piled from floor to ceiling.

There is little doubt about Colton almost dying. Going five days before being diagnosed with a ruptured appendix. By then his body was full of infection.  The doctors left tubes in Colton’s abdomen to drain the infection. His ordeal lasted 15 days, Colton was released from the hospital. Burpo gives credit the prayers of God’s people for the miraculous deliverance of Colton death.

Burpo goes on to tell about their need for money to take care of the doctor bills that are piling up. Then, lo and behold, a miracle occurs and the exact amounts are being paid in full. Okay, I know this could be a work of God, or it could be a great story. It’s one of those “believe it if I saw it” type deals.

Four months after Colton is released from the hospital, the family takes a trip to Sonja’s brothers house for a holiday. This is when the whole conversation took place. I’m sorry but it is hard for me to get my 4 year old to sit down concentrate for three minutes, none the less, tell me a whole story that happened four months ago! I just can’t believe this story. What I can believe is, this little boy who has been raised in a Pastors house. Obviously have been told the stories in the bible more than once. I can believe that this little boy has a great imagination. What little 3-4 year old doesn’t? Here are a few things Colton describes…

I don’t want this post to get deep into the true meanings of the Bible but as for this book, it is a great STORY. The only truths in it, are the ones they can prove with doctor bills.Kudos to using your kids near death experience to gain financially.

Disclosure of Material Connection: I received this book free from the publisher through the BookSneeze®.com <http://BookSneeze®.com> book review bloggers program. I was not required to write a positive review. The opinions I have expressed are my own. I am disclosing this in accordance with the Federal Trade Commission’s 16 CFR, Part 255 <http://www.access.gpo.gov/nara/cfr/waisidx_03/16cfr255_03.html> : “Guides Concerning the Use of Endorsements and Testimonials in Advertising.”

Firstly, I am a woman Son of God (Rom 8:14) Wife to a Firefighter Mother of three Daughter Sister Friend I am a country girl at heart. My roots are deep. Gardening is my favorite past-time. Photography is in my blood. I am genuine and best of all...I am me.